A Deep History of Snowblades in Smithers

A Deep History of Snowblades in Smithers

“Its bigger than all of us, it’s bigger than we’ve ever been,” says Greg Graham, co-founder of the Shred Shack of Gnar (S.S.O.G) – a cabin with personality on Hudson Bay Mountain Resort.

What Graham is referring to is the exploding snow blade scene on Hudson Bay Mountain Resort in Smithers BC. A scene that the S.S.O.G single-handedly crafted. Greg Graham the co-founder of the Shred Shack of Gnar waves his snowblades in the air with love for all to see. Photo by Tanner Elliott

“At first you’d see one, maybe two, now it’s like a beehive over there (The SSOG) skiers and snowboarders ride in and bladers ride out!” Says Jason Krauskopf Co-owner of Local Supply Co, Smithers premier blade shop.

The first weekend in April was the first annual Blade X World Championships. After tireless hours building a course, trophies and of course tolerance for the sport, the stage was set. The course consisted of back to back wutangs, 6 serpentine banked corners and one showcase finishing jump.

“Oliemans, McAlonan, Fraser, Rysavy to the start gate” barked from the speakers, all the big names are here. As in most sports these days, the up and coming young guns were here to stake their claim on the sport. While the championships run their course, the innovators and spectators alike watch from the sideline. As the trophies are hoisted, and dreams are realized, all one can think is “Its bigger than all of us, it’s bigger than we’ve ever been.”

The Future of Snowblades

Your new champion? Jason Oliemans. Growing up in ski club and racing through his youth led Oliemans to race and now he is a coach for the Alberta Ski Cross team. Atop the podium, his full race potential realized, with a side of overwhelming emotions. This Smither’s soul found a new purpose on blades. Internally he questions if he should forgo his coaching career? Blades might be the future of Smithers, but could they possibly be the skis of the future? Shorter, lighter, faster – all signs point yes. Dropping into the first annual Blade X World Championships course with the cabin colony below, including the Shred Shack of Gnar. Photo by Tanner Elliott 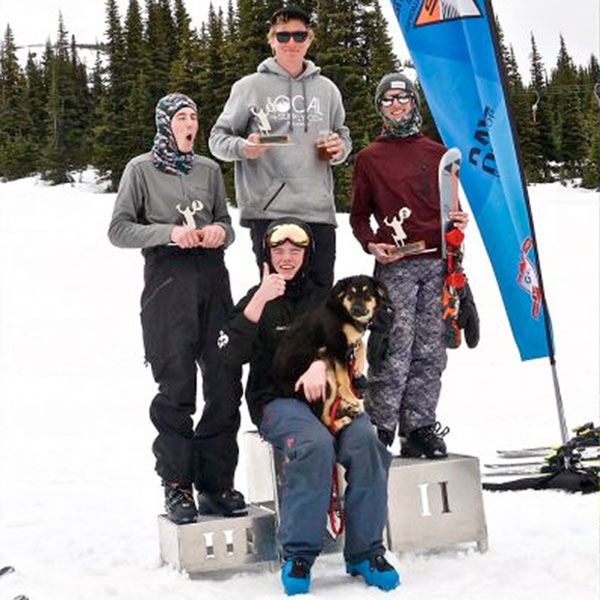 Author and photographer Tanner Elliott was born and raised in Smithers. He speaks fluently in sarcasm, skis pretty and knows how to have (arguably) too much fun.