When he moved to Smithers thirty years ago, Mark Tworow thought he’d never paint the mountain. Tworow had finished his Bachelor of Fine Arts in Alberta not long before, and he admits that landscape painting wasn’t really the in thing in the art world at the time. But he had a passion for being out on the trails and the backroads, and he found all the inspiration he needed in the spectacular surroundings of his new home. “I was into landscapes, and had done some in school, but when I got here, I thought I’d never paint anything of Hudson Bay Mountain,” he laughs. “I figured it had been done and done. But then you live here a while, and you realize it starts showing up in your work, even if you hadn’t planned on painting it. You can see it from almost everywhere in the valley, and it’s just such a part of this place and how we relate where we live.” 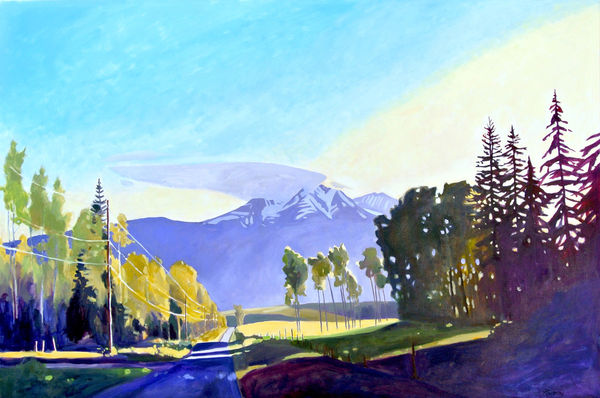 "Billeter and the Mountain" 40 x 60 painting by Mark Tworow Despite his initial reluctance, the skyscraping peak that rises to the west of Smithers—known as Dzilh Yez in the Witsuwit’en language—would eventually end up as the subject of one of Tworow’s shows. These days, however, his work doesn’t always focus on the most conspicuous features of the area—in bursting, luminous colors that capture the life and feel of the land, Tworow paints a remarkable diversity of scenes, from gold-lit forests and icy ridges to rolling farmlands and backcountry tarns.

A full-time painter who cites masters such as Lawren Harris, Joan Mitchell and Richard Diebenkorn as influences, Tworow describes himself as an abstract expressionist who uses unconventional approaches to embody the landscapes he loves.

“I’m not a realist per se, so that frees me up to play with colour and form,” he notes. “To me, the most interesting paintings live somewhere between pure abstract and realism.”

Now one of the Bulkley Valley’s best-known creatives, Tworow is also one of its most prolific—working in oils, which require many days of drying time between layers, he often has six or more paintings in process at once.

That much painting, of course, means he needs to spend just as much time out exploring the places that inspire him. So we set out to learn a bit more about his favourite places and how they’ve influenced his work, connecting for a socially  distanced conversation at Bugwood Coffee in the winter of 2021.

As an artist, what is it about the Smithers area that holds your interest?

I think it’s mostly that we’ve got such a variety of terrain. We’ve got the valley and the valley floor, which is lovely rural stuff—the roads and fields with the view of Hudson Bay and the other mountains in behind. And then we’ve got the mountains themselves, and there’s just so much access to the alpine. There are just a whole lot of beautiful views and perspectives clustered together here. I expand outwards a bit, too, like to the Kispiox Valley and the Babine Mountains, where I’ve painted quite a bit over the years. 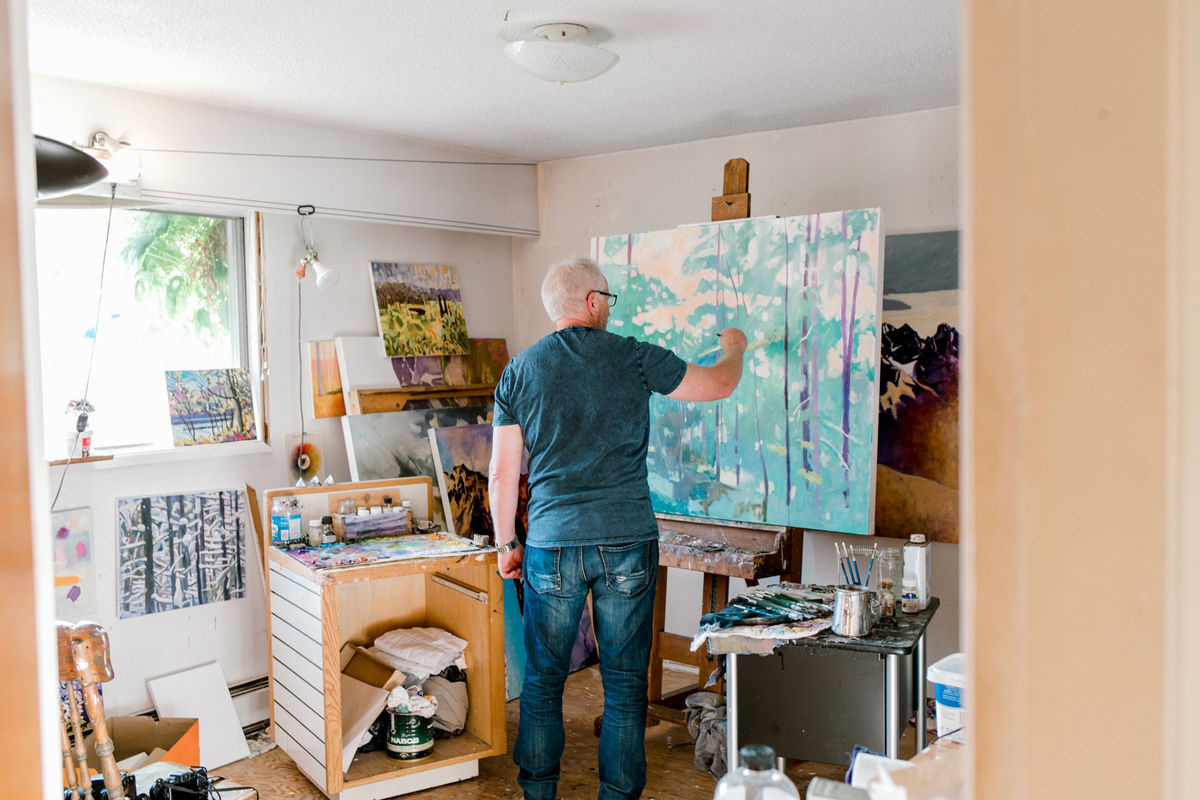 Is your process mostly in the studio or plein air?

I’m mostly in the studio nowadays, working from photographs. I used to do a lot of plein air, but I’ve done so less as I’ve switched to doing larger works. The larger ones don’t work so well for plein air, since the light changes so fast and the canvases are basically a big kite when it’s windy. A lot of what I’m painting you have to hike to, so it’s not always the easiest thing to bring a rig in to those places.

So how do you find your viewpoints, or decide what it is that you’re going to paint?

You know, a lot of it comes from the fact that we like to recreate—hiking or fishing or biking in the summertime. In the winter, it’s from snowshoeing, cross-country skiing or the other things we do outside. Most of what I paint is things I see while I’m doing the stuff I do outdoors here, so it’s pretty natural to come up with it. I rarely go out and do a photo shoot just because I need something to paint. I’m probably pretty annoying to hike with, actually, because I’m always saying ‘Oh, just give me a second’ while I get my camera or phone out. I slow everybody down, I think, because I’m always taking photos when the light gets good. But that’s how my process works and how I gather my subject matter.

What are some of the places around Smithers that have become favourites for you?

There are a few spots I’ve painted a number of times that are very special to me, like Sinclair Plateau in the Telkwa Mountains, which looks out on the Howson Range. Along the McCabe trail in the Babines, too—I’ve painted that any number of times. Then there’s the Telkwa High Road, where I’ve done tens of paintings in the summer. And the Kispiox Valley in the fall.

And I guess Hudson Bay Mountain would fall in there now, too.

Well, yes, my last show was based on paintings of the mountain. That was a neat one, because there’s all these different ecosystems up there—the ridge above Seymour Lake, for example, is a lot of dry pine, and then over by Twin Falls it’s really lush and there’s cedar and hemlock in there, or you can hike all the way up to the glacier, which I’ve painted a few times. The back of the mountain looks very different from the front, too, so I’ve painted there at Dennis Lake quite a bit Are there a few paintings of yours that you’re most proud of?

Well, that’s a tough question. I can’t remember which artist said it, but when someone asked him which painting was his favourite, he said “The one I’m working on now.” It’s like that for me, in that I’m always driven by the next painting I’m doing.

And what would that be?

It’s one from the Babines, actually. If you’re up high on the Cronin trail and look down, there’s a lake there up against Hyland Mountain. We biked into Silver King, hiked Hyland Pass and then down to that lake, and that’s the view that I’m painting. I’m quite pleased with that one so far.

Given that you spend so much time outdoors around Smithers, what are a few spots you’d recommend to visitors?

I’d recommend the McCabe trail looking down into Silver King, or into the Silver King basin itself if you’re willing to hike or bike that far. Opal Ridge on Hudson Bay is great too—the upper meadows are quite spectacular, and the view from there is, too. And if you’re not a hiker, just go for a drive on the Telkwa High Road—especially in the fall.

You can find Mark’s work on Instagram and his website. A collection of his most recent works will be displayed in a solo show at the Smithers Art Gallery in September 2021.